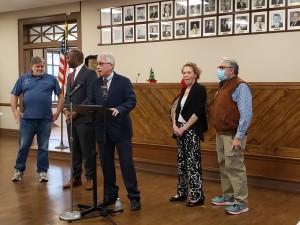 Steve Mulroy announced his candidacy for Shelby County District Attorney on Thursday, Dec. 9, 2021 at the International Brotherhood of Electrical Workers (IBEW) Local 474 Hall in Midtown to an enthusiastic crowd of several dozen people.

“Every person who breaks the law must be held accountable, Steve Mulroy said Thursday.

And that, he said, includes law enforcement.

“If you have a prosecutor who withholds evidence and breaks other rules and gets convictions overturned time and time again, then she needs to be held accountable too, not just by the courts, but by the voters of this county,” Mulroy said.””